A non-fungible token (NFT) is a virtual token that uses blockchain technology to prove the owner of a digital asset.

Addresses pointing to digital files such as pictures and videos are stored in tokens, and are used to indicate their unique originality and ownership.

That is, some sort of virtual certificate of authenticity.

Bitcoin Legend (BCL) made a hero card using this NFT technology. Modern people have a strong desire for hero characters. That’s why so many heroes appear in Marvel Studios and DC. However, only certain specific characters become heroes.

Bitcoin Legend’s hero card concept is that anyone in general can become a hero. Maxform NFT Hero Card was developed by the BitcoinLegend Core team It was composed of UNIQUE DIGITAL COLLECTIBLES on the Ethereum blockchain ERC-721.

Five heroes are reborn with NFT cards. It is designed with the concept that any ordinary person can become a hero. It’s half normal clothing and half in hero clothing.

This is made even more unique by the rarity program.  There is no identical form among the issued cards.  Hair, clothing, weapons, accessories, mask, background, etc. item items are all different.

Among them, there is not one character but a total of 5 characters in different poses and postures.  For each such character, 2000 hero cards are issued.  The approach is different from other NFTs that create 10,000 pieces with one character. 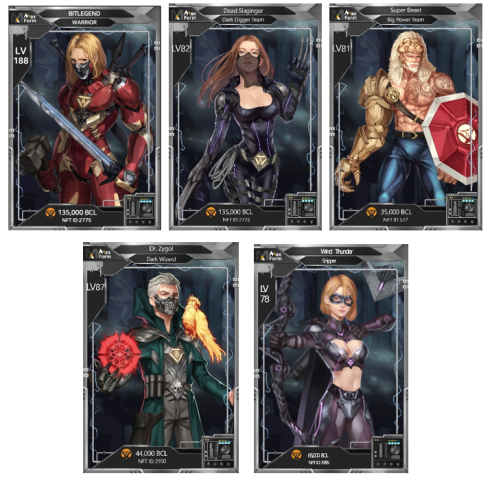 Hero cards with this artistic design are converted into Game-Fi cards in the Metaverse game. The character’s ability values ​​are written on the card frame.

BITCOIN LEGEND uses AI technology to create webtoon characters similar to the real users themselves. Users can also produce clothing, ornaments and other game items. Hero History is made by Webtoon and Song (Webtoon+Rapper’ Rap+NFT animation). Bitlegend, a male character, currently has 767,000 views (https://youtu.be/s0FSVXZ-wSs), and Dark Slezenger, a female character, has 548,000 views (https://youtu.be/8Al9l7YVLC4)

Currently, the 3rd name is “Who is winner?”. It is a battle between good and evil, and several characters appear. The character are Dr. Zygol, Super Beast, and Wind Thunder. It was uploaded on YouTube Recently (https://youtu.be/gfjBqRpmh6U)

The BCL token is used as the monetary means of the Game-Fi card used in the Metaverse world. This BCL token is listed on Lbank and Pancake Swap. And, Bitcoin Legend developed a mining app to secure users and launched it a year ago. It currently has 2.65 million users.