Music producers put in a lot of effort, from conception to mixing, and they are the cornerstone of any thematic creation. David Anthony, an Established Stockholm-based Multi-Platinum music producer, is motivated by his desire to create interesting music from a variety of styles. He experiments with hand-picked melodic pieces from diverse genres to produce a flawless symphony. Beginning his musical career from a young age, the gifted artist has always created some of the most astounding and unparalleled chromatic progressions and soundscapes.

He recently released a new single “Make You Work” with Natalis, which features the most exotic musical undertones that make the audience doubt their preconceived notions of tropical house music. The engaging track feels like a musical voyage through unconventional beats, and Natalis’ enticing sexy vocals guide everyone along the road to an uplifted mood through loops of exotic thematic elements. Nobody would want to sleep on this collaboration! The artists create genuine magic together, and the recent record is only a taste of their incredible artistry. When you listen to “Make You Work”, you can only visualize it being performed at a festival as the sun sets, with the crowd singing along; it’s a track that has undoubtedly stuck with the masses since its release. Only maestros like David Anthony and Natalis’ production skills can combine to create something as wonderful as this song. 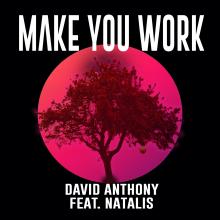 Lyrically, “Make You Work” is open to interpretation, although Natalis is highlighting how vital it may be to simply put in the effort for the things that truly matter.

David Anthony is all prepared to disrupt the conventional thinking of EDM performers with his powerful music anthems and has gone on a mission to stand out from the crowd with his attention-grabbing musical successes. His style, intensity, and notable voice collaborations all remain perfectly balanced in his productions, highlighting his considerable musical understanding. His music reflects his extensive expertise and creates a spectacular selection of expressive, sincere, and wonderfully designed soundtracks.