As the dust settles from the battlegrounds of yesterday’s matches at the iconic Sheikh Zayed Stadium, cricket fans are waiting in firm anticipation to what today will bring. The 29th of January of 2021 has marked the start of the second day of the group stages at the Abu Dhabi T10 League. Before diving into today’s statistics, a brief look at how yesterday’s evening turned out to be.

The first match of the evening saw the Maratha Arabians triumphing over the Norther Warriors by 5 wickets. Abdul Shakoor was the highest run maker for the Maratha Arabians with 73 runs from 28 balls while Lendl Simmons provided a healthy 54 runs boost to the Northern Warriors in 31 balls. Fabian Allen from the Northern Warriors was the highest wicket taker in the match with 2 wickets to his name. In the second match, The Pune Devils faced off against the Deccan Gladiators, which they won by 7 wickets. Kennar Lewis from the Pune Devils got the highest run of 57 out of 28 with Nassir Hossain prey upon 3 wickets. The final match of the evening was held between the Delhi Bulls and the Bangla Tigers which Delhi Bulls won by 7 wickets. The highest run maker in the match was Johnson Charles from the Bangla Tigers making 73 runs from just 35 balls and Karim Janat took two wickets making it the highest in the match.

Match day 2 saw the first match of the evening between the Pune Devils and the Qalandars. Qalandars triumphed over Pune Devils by 9 wickets. Pune Devils made 107 for 2 in 10 overs while the Qalandars made 108 with a loss of one wicket in just 7.1 overs. The second match saw the face-off between the Maratha Arabians and the Delhi Bulls which the Delhi Bulls won by 9 wickets. Maratha Arabians set a target of 87 after losing 4 wickets in 10 overs while Delhi Bulls closed the gap in just 5 overs at the expense of just one wicket. The final match of the evening was held between the Deccan Gladiators and the Team Abu Dhabi, which the Deccan Gladiators won by 6 wickets. 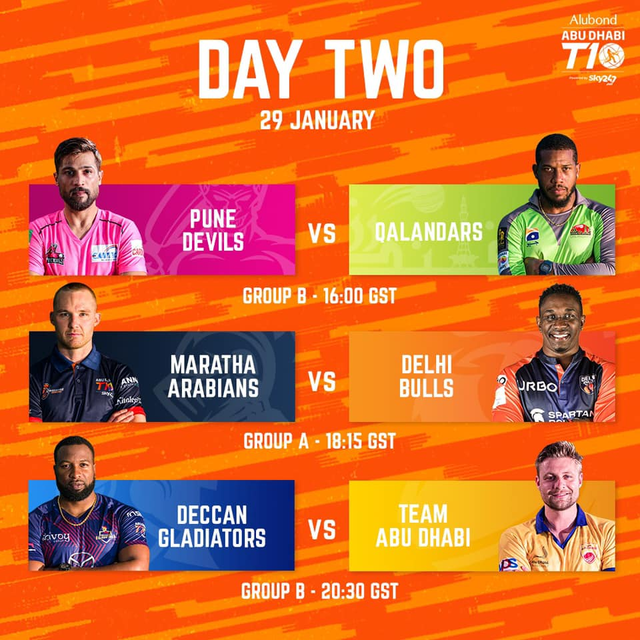 Fans are getting set for tomorrow in matchday 3. Tomorrow’s first match will be faced off between the Bangla Tigers and the Maratha Arabians. The second match will feature Team Abu Dhabi and the Qalandars and the final face off in the evening will be between the Northern Warriors and the Delhi Bulls.

Apart from the official broadcast partners, FairPlay News is the home for the T10 League with other sporting events from all around the world. Aiming to provide a fair and just sporting environment, the proud sponsors of the Maratha Arabians are looking forward to becoming the one stop solution for all sporting fans. Stay tuned to FairPlay News for the most up to date sports updates fans can swear by.

For more details visit on https://fairplaynews.club/